The Alp (DLC) is a pale and haggard creature. It encroaches on settlements in the cover of night, invading the sleep of its helpless inhabitants with ghastly visions, and feeding on the fear and anguish of its victims like a parasite. Scholars speculate that Alps didn’t always look and behave like they do now; most Alps have eye sockets, but no eyes, and mouths with teeth, but only a rudimentary digestive system. Their pale skin peels like old parchment, their bones are frail, and their insides are dark and show signs of decay. Perhaps the Alp is the victim of an ancient curse, or perhaps it simply evolved from a different creature to the nocturnal predator it is now. Whatever it is, don’t fall asleep!

Direwolves are a type of enemy in Battle Brothers. They are fast and dangerous, as they will quickly charge, flank, and overwhelm a target in numbers. Can attack 3 times if they don't move.

The Hexe (DLC) is a witch inspired by Grimm’s fairy tales, a malevolent old crone living in swamps and forests outside of villages alone or in a coven with other Hexen. They’re human, but have long sacrificed their humanity for otherworldly powers. They’re feared, but also worshiped by some. They’re burned at the stake, and yet people seek them out to plead for miracles. They lure and abduct little children to make broth and concoctions out of, they strike terrible pacts with villagers to receive their firstborn, they weave curses and cast hexes. Their huts may or may not be made of candy. With her sorcery, a Hexe can enthrall wild beasts, and even warp the mind of humans, and so will often be found in the company of creatures that serve her. 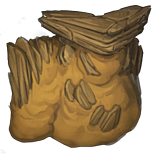 Lindwurms are a type of enemy in Battle Brothers. They are very dangerous two-tiles beasts. Tiles are always adjacent. The upper body will move first, followed by the tail. The upper body and the tail share the same health and armor but attack differently. Acidic blood courses through its veins and any attacker wounding the Lindwurm in melee will suffer the blood's corrosive effects as skin and armor starts to melt away.

Nachzehrers are a type of enemy in Battle Brothers. They count as beasts, but because they feast on corpses, they are often seen in company with the Zombies or Ancient Dead.

The peasantry tells stories of men and women coming back to life after the sin of committing suicide as horribly shaped monstrosities, turned into a Nachzehrer. They’re said to resemble grey-skinned devils that dig up graves with their claws and devour fresh corpses, even devour parts of themselves and their funeral shrouds, and to grow in strength as they do so until they inevitably prey on the living. Others may claim that they are but wild beasts, merely scavengers drawn to fresh graves like seagulls to fishing nets. Whatever their true nature, they bring misery and disease upon any village they bedevil.

The creature known as Nachzehrer can grow up to two times as it gorges itself on a corpse, and it’s not shy of cannibalizing its own kind. Each time it does so, it increases in size and strength significantly. At its largest, when it’s become a hulking behemoth of grey flesh, it gains the ability to swallow a man whole. Anyone devoured like this isn’t dead, but in the belly of the beast and removed from the map. Slaying the Nachzehrer will free that character again, albeit covered in goo, but retreating while a character is devoured in this way will spell certain death for him.

A Nachzehrer has long claws that they use to dig through the earth in search of food, and which can tear grievous wounds in combat. The larger the Nachzehrer, the more dangerous the claws become. On the bright side, a Nachzehrer doesn’t have any armor, which favors swords and cleavers, and it gets easier to hit with ranged weapons, the larger and less nimble it becomes.

The Waldschrat, or Schrat (DLC) for short, is a fabled living tree found in the most remote forests of the world. A creature of bark and wood, it resembles no other, and its mind is truly alien. It blends between trees and shambles slowly, its roots digging through the soil. A frightening night time story tells of how trees watered with the blood of the unjustly killed turn into twisted living trees, out to strangle and choke the life out of children that don’t behave.

The Unhold (DLC) is a lumbering giant, easily the size of three men, and dwarfing even the tallest orc. It eats whole sheep for a snack and empties a pond to wash it down. There’s tales of enraged Unholds leveling remote farms and plucking the limbs off of unlucky farmers like wings from insects, but closer examination will reveal that Unholds aren’t malicious creatures. They’re fiercely territorial, but may often be content to persuade with ear-deafening bellowing and threatening gestures any invaders to run for their lives. The Unhold is a somewhat solitary creature and can be found either alone or in small groups only.

There are 3 variants of Unholds. The most common variant is found in the hills and tundra. Another variant is said to be found in swamps and sometimes forests, where they inhabit caves. The fiercest is the northern variant found in the snowy wastes, with white fur that protects equally against cold and steel. Then there are also armored Unholds that are tamed by barbarians.

The Webknecht (DLC) is a large arachnid that lives in sizable colonies in the dark areas of forests throughout the world of Battle Brothers. It’s there that they spin their webs between trees to trap anything from bird to deer and between. Unlike most other beasts, Webknechts don’t usually roam a lot, preferring instead to sit in their territory and wait until something unfortunate gets itself caught in one of their nets. Still, they’re known to choose the vicinity of settlements for their home on occasion and threaten the lives of villagers and their livestock. 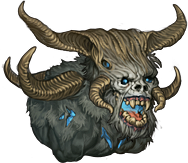 The ijirok is the boss you encounter at the Hunting Ground legendary location.

The kraken is the boss you encounter at the Stone Pillars legendary location. At first its name will be "Beast of Beasts". After you killed it, you can encounter more krakens (with other names) in the wild.

Community content is available under CC-BY-SA unless otherwise noted.