Tactical turn based combat is the heart of Battle Brothers. The battlefield is a hex-tiled grid, with elevation, obstacles/terrain considerations and zone of control mechanics. An Action Point (AP) system limits the number of actions (movement, skill use) a unit can take each round and an initiative-based system determines the order in which combatants act out their turns.[1]

The character with the highest initiative will start first in a battle round, followed by characters with lower initiative. As initiative is lowered when a character builds up fatigue or has a penalty to max. fatigue (due to armor/weapons or other effects), his turn may move from first to last very quickly, if he gets fatigued too fast and the enemies do not.

Action Points (AP):
AP is spent by actions (moving, striking, using special skills/consumables, etc) and refreshed at the start of the every round. All brothers and most enemy units have 9AP. A few have less (ie Wiedergangers) and some have more (ie Direwolves, Goblin Wolfriders).

Movement on flat ground (Grass/Plains/Roads) costs 2AP. Rough terrain such as Forest/Snow have tiles that typically cost 3AP (there are tiles that still cost 2AP though (ie Light Snow)). Swamp costs 4AP for tiles with Murky Water. Changing elevation adds a further +1 to AP cost per tile. Most strikes from 1-handed weapons use 4AP (exception: Dagger (with Mastery) uses only 3AP) and strikes from 2-handed weapons use 6AP (exception: Warbrand, Rhomphaia and 2-Handed Cleavers use 4AP on regular strikes; Jagged Pike uses 5AP).

A typical battle starts with both parties in a line formation (1-2 lines deep for your forces, may be deeper for the enemy), with at least 5 hexes between parties. Human forces cannot close to melee distance within 1 round as traversing a hex takes a minimum of 2AP. Direwolves and Goblin Wolfriders on the other hand can definitely close the gap in 1 round. As bows have a range of 7 tiles on the flat (8 with mastery) and crossbows have a range of 6 tiles, both sides start the 1st round within firing distance of ranged combatants.

Fatigue:
Apart from AP, all weapon strikes and movement on the battlefield also cost fatigue to execute, therefore a fully fatigued character can neither strike nor move. Every character recovers 15 fatigue at the start of his turn. As per full release version 1.1, dodging blows also increases Fatigue by 2 and getting struck by a blow increases Fatigue by 5.

Base chance to hit (shown after selecting a skill and mousing over a target) is essentially: melee skill of brother subtracted against base melee defense of target. [2]

This is further modified by various factors listed below.

Defense is improved by shields (mentioned below), various perks like Dodge, Shield Expert, Reach Advantage, etc. However, it is also subject to diminishing returns stat-wise at values beyond 50: each Melee Defense attribute point over 50 is halved.[3] [4]

When an attack is made, a regular d100 roll happens (a procedure to get a random number in the range of 1 to 100). If the number is lower than the to-hit % chance, then this is a hit. At this point, a second d100 roll is made to see if it the attack hits the head. [5]

The Shieldwall skill (not available to mercenaries using a Buckler as it is not a "normal" shield) can be used in combat to double shield defense (inclusive of Shield Expert bonus) with a additional +5 bonus for each adjacent ally also using the Shieldwall skill. This tactic can be used to give your front rank mercenaries a big boost to defense when taking a large amount of damage is otherwise inevitable (e.g. needing to advance while under fire from enemy ranged troops).

The Knock Back skill knocks the target away by 1 tile, costs 4AP, 20 Fatigue, and has a flat +25 to hit bonus. Terrain and surround bonuses apply as usual. However unlike regular strikes, Knock Back does no direct damage and its roll is not displayed in the combat log. The game will allow you to use an ability against an enemy that is immune, it will then simply miss. This is relevant because one might assume that a pike's repel ability which both knockbacks and staggers would still apply the stagger effect to an immune enemy, it does not.

Height levels are used as ground elevations (hills) on the battle map. When standing on them, you gain a bonus to hit chance while enemies suffer a penalty to their chance to hit you.

There are the following types of height level in-game:

When standing on a higher height level than your opponent, you gain a +10% chance to hit and they suffer a -10% penalty to hit. It is always advantageous to have the high ground in any battle and the AI will try to occupy the high ground whenever possible, especially their ranged units.

Ranged weapons gain an additional hex of range for each level of height and improved hit chance versus targets at a lower height level.

You only count as being in melee attack range if there is a one level difference of height between opposing characters standing in adjacent hexes. If there are two or more levels of height difference between the hex a character is standing on and an enemy in an adjacent hex, you do not count as being in melee attack range or being in each other's Zone of Control.

Surrounding occurs when two or more units are adjacent to another one they fight against. For each unit after the first surrounding, a bonus of +5% melee hit chance is given to allies attacking the surrounded target. Both allies and enemies are affected by surrounding.[6] Stunned brothers or brothers with Ranged Weapons will not contribute to surround bonus.[7] Non-hostile parties, be it Peasants, Mercenaries, Noble House Forces or alike, don't provide surround bonus for your party.

Some Perks can affect surrounding:

Let's study a case. A Raider is surrounded by your mercenaries Diethelm, Tostig and Erik.
It is Diethelm's turn. Attacking the Raider with his Handaxe, Diethelm benefits from a bonus of +10% hit chance. That is +5% for each ally adjacent to the target after the first. With Backstabber, Diethelm would have benefited from a total bonus of +20% hit chance.
It is now the turn of Gunther, another of your mercenary. Gunther is not adjacent to the surrounded Raider and attacks him with a Longaxe. He will also benefit from a bonus of +10% hit chance, doubled with Backstabber for the same reasons.
Finally, your archer Bernhard acts. He attacks the same Raider with a Hunting Bow. Bernhard will not benefit from any bonus because he is using a Ranged Weapon.

Another case in picture: 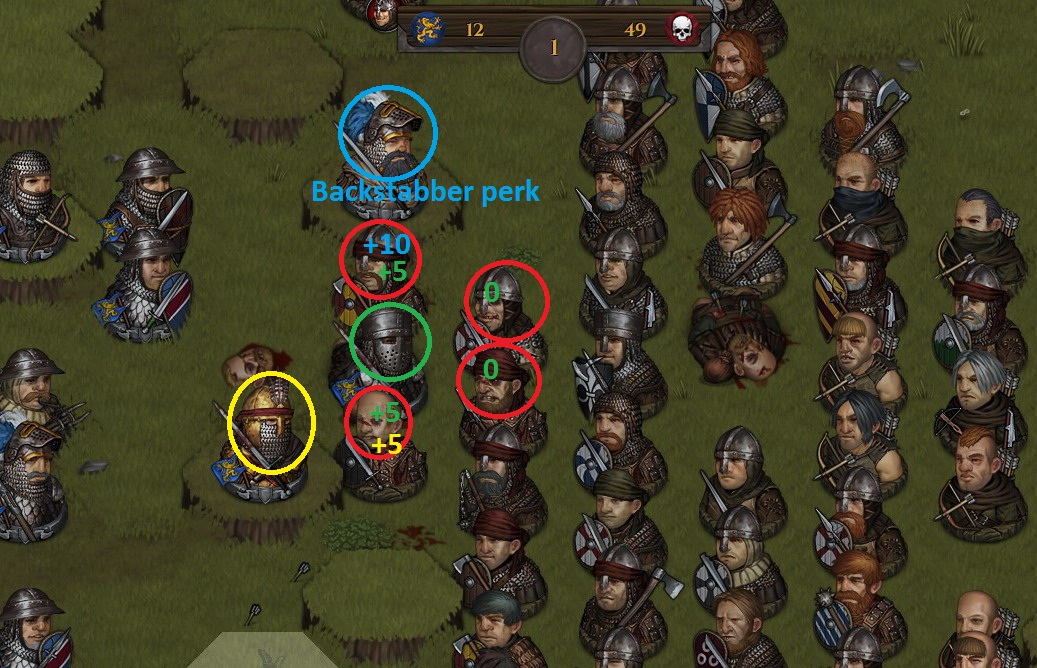 NOTE: It should be noted that in case of friendly melee fire such as the two handed axe round swing, the enemy surround modifier works AGAINST you, which is particularly devastating against Weidergangers as they have backstabber. Meaning in the example above if the blue circled brother was to use his two tile pierce attack against the raider below, and thereby also target the brother circled in green. The chance to hit the green brother with friendly fire would likely be higher than that of hitting the enemy bandit, as the surround multiplier of nearby raiders would apply to the friendly fire attack. This is likely an oversight by the devs.

Battles fought during the night give combatants the Nighttime debuff which gives them penalties of -2 Vision, -30% Ranged Skill and -30% Ranged Defense (if not immune to the effects - e.g. having The Fangshire helmet equipped). As Ranged Skill for both AI ranged troops and human-controlled mercenaries generally tends to be significantly higher than Ranged Defense in most cases, this usually works out in favor of the defender. Thus it is advantageous to attack enemies which have ranged superiority during Nighttime.

Ranged to-hit rolls operate in the same manner as melee to-hit rolls, where to-hit = Ranged Skill of brother subtracted by base Ranged Defense of target. A few additional factors come into play though, besides the usual gear and perk considerations, namely:

1. Distance and base accuracy bonus of strike

2. Cover (shown as "Line of fire blocked" with it's own unique icon of a shield with an arrow) reduces overall to-hit chance by 75%. This penalty can be reduced to 50% by the Bullseye perk. In the above example (a.), the bowman would only have a 12% to-hit chance on the Bandit Thug if he had cover (e.g he was standing behind another enemy unit or was behind one of your own units. This chance would be improved to 24% with the Bullseye perk making it a core pick for ranged mercenaries.

3. Scatter is a mechanic whereby a missed ranged attack has a chance to strike an adjacent target, friendly or enemy. Because of scatter, it can be effective to fire into a block of enemy units even if your hit chance on your intended target is low for whatever reason (e.g. due to the line of fire being blocked, due to low ranged skill or due to distance). In this circumstance, you have a reasonable chance to hit something (hopefully an enemy!).

When the target of a skill is hit (intentionally or not) it will receive damage. There are two main types of damage:

Each type is rolled separately. Damage dealt and received depends on several factors including the weapon and skill used as well as perks, traits and other modifiers. Armor absorbs and reduces damage taken. This is a simplified formula for calculating armor and hitpoints damage:

Secondary damage (bleeding, miasma, etc.) usually bypasses armor and deals a constant amount of damage which can be mitigated with skills like Indomitable.

Two-Handed Axes' Split Man skill has specific mechanics. The fact that it hits the head on a successful attack has mislead many players into thinking that it always does critical damage.

Weapon durability is important, as when a weapon's or shield's durability reaches zero, the weapon or shield will break.

Morale is one of five states and represents the mental condition of combatants and their effectiveness in battle. At the lowest state, fleeing, a character will be outside your control - although they may eventually rally again. Morale changes as the battle unfolds, with characters that have high resolve less likely to fall to low morale states. Many of your opponents are affected by morale as well.

Effects of Morale on various stats are shown below:

Negative Morale checks (lowers morale state if check fails) are triggered:
1) when engaged in melee by more than one opponent and more than already engaged by this turn -The difficulty is relatively low, but scales with the danger of the opponent closing in (i.e. more likely to fail against an Orc Warrior than a Bandit Thug)[9]
2) when a unit takes 15 or more hp damage (only 1 hp damage required with Fearsome perk)
3) when a friendly unit dies - the more powerful a character is and the closer he is to his allies, the more impact his death has on everyone’s morale, and therefore the higher the morale check difficulty will be in case he is killed)[10]
4) when units like Geists and Ancient Priests use morale affecting skills (Horrific Scream and Horror) - Horrific Scream now triggers 4 small morale checks (since build 0.9).[9]

Positive Morale checks (improves morale state if check succeeds) are triggered:
1) when an opponent is slain - the difficulty of the morale check depends on how powerful and how close the opponent was – a Goblin Chieftain being slain is much more likely to improve everyone’s morale than a random goblin out of a dozen more.[10]
2) when the Rally skill is used - only affects men with Wavering or worse morale: has a chance to regain control of fleeing men and to raise morale (see Rally the Troops in Perks)

Community content is available under CC-BY-SA unless otherwise noted.
Advertisement